Hi everyone! I’m Dom, programmer at Spiral Circus, and I’m really excited to share the news that our surreal underwater adventure Silt is coming to PlayStation 5 and PlayStation 4 on June 1.

Silt is a puzzle-adventure set deep within a harrowing ocean abyss, where you play as a lone diver searching the deep and exploring dangerous waters to uncover long-forgotten mysteries. But the diver has a secret. Harnessing an unusual power, you’ll be able to possess sea creatures that roam the ocean void, discovering new creatures and using their unique abilities to solve puzzles, traverse the environment, and make your way deeper into the darkness.

With the game only a few weeks away, we wanted to share one of the processes we’ve developed to bring our artist Tom’s traditional ink-on-paper art from still imagery into an interactive game world. 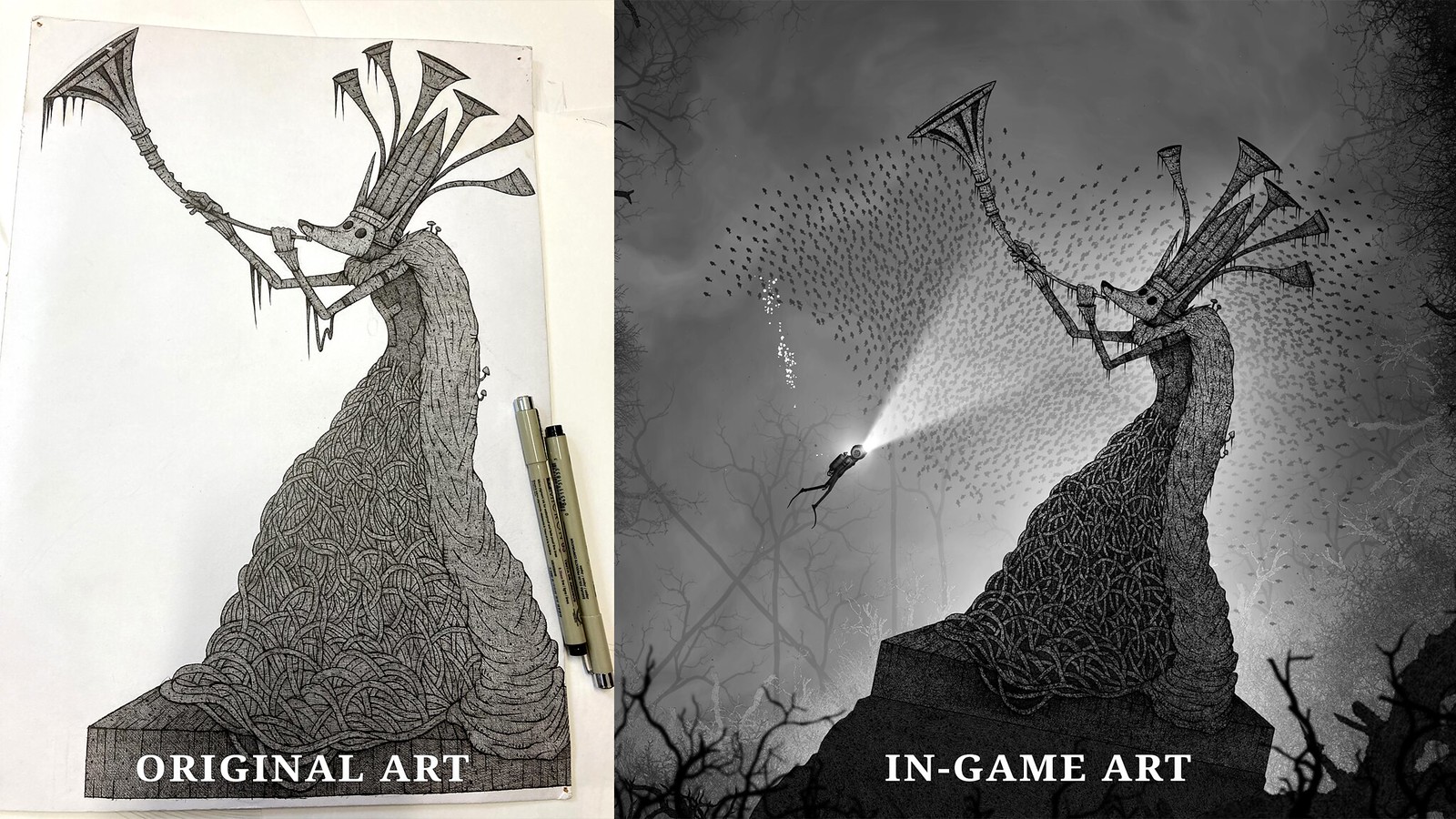 From pen-and-ink drawings to game assets

Getting Tom’s artwork into the game would be the biggest technical challenge for us. It was essential that the game looked like one of Tom’s paintings and not like his art had been transplanted out of context into something else. The idea was to give Tom near total control over the look of the game right from inside the drawing program. This means control over composition, camera framing, tonal contrast, lighting, shadow, texture, fog, all the stuff he would just draw naturally if he were working on one of his pieces.

We had to find a way to let Tom do all this, while retaining the ability to reconstruct the whole thing in the game engine and make it interactive. We used layers in the drawing program to keep logical elements separated from each other, then wrote a script to churn through the layers and convert them into something the game engine could process. 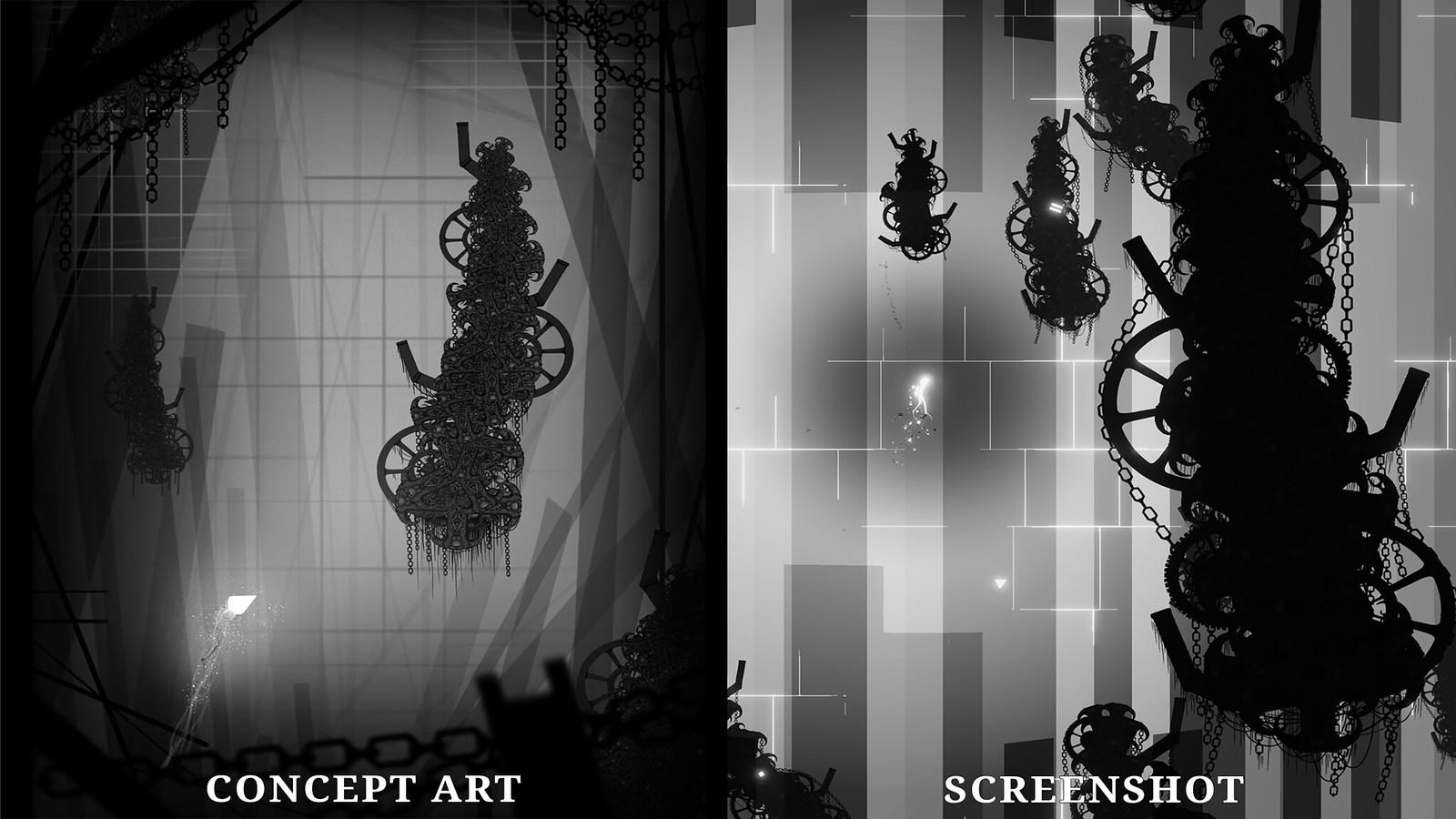 Bringing concept art to life in the game

To create a level for Silt, Tom creates a single, unique, high-resolution image in a drawing program. He designs it, composes it, lights it, details it just as if he were producing a digital painting. We then run a script that turns the single layered art file into a fully interactive level in the game engine, slicing it into chunks, placing them in the correct places in the scene, generating collision, adding dynamic lighting, generating entrance and exit points, setting up cameras, and hooking up scripts for gameplay.

We configure all of this using the names of the layers in the art file. Once that script runs, the level is ready to play. We can then add extra gameplay elements, visual effects and sounds in the game engine to help it come together into an immersive, atmospheric experience.

Timelapse showing the creation process for an area in Silt

We spent a long-time iterating on this procedure, getting the in-game appearance as close as possible to the appearance in the drawing program. When it was finished, Tom could design our game world with the confidence that his art would appear in-game exactly as he meant it to. Investing the time and effort getting the technical barriers out of the way of art can really pay off in the long run.

We hope that gives you more of an insight into the world of Silt. One of our main ambitions for the game is to deliver a unique, surreal experience that we hope you’ll remember long after you’ve finished playing, and we can’t wait for you to discover the deep when the game launches on PS5 and PS4 on June 1.